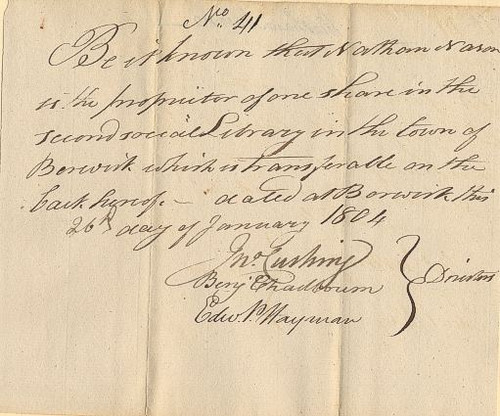 An early handwritten stock certificate dated 1804 issued for One Share in The Second Social Library in Berwick, Massachusetts, (now Maine). No. 41. 6 X 7 in. format This item is over 205 years old. Signed by Judge Benjamin Chadbourne, Edward P. Hayman and Jno. Cushing as Directors. The house of Judge Benjamin Chadbourne still stands today at the corner of Vine and Liberty Streets in South Berwick. Humphrey Chadbourne purchased a tract of land of Sagamore Roles of the Newichawanocks, containing " half a mile of ground between Little and Great rivers," May 10, 1643. This was the first recorded purchase of land of the Indians in Maine, and was in that part of Kittery now South Berwick. It embraced the tract upon which the Berwick academy now stands. His son, Judge Benjamin Chadbourne, was one of the founders of that academy. He erected the colonial residence which stands to-day shaded by stately elms on the road to " Old Fields," just south of the railroad crossing. The house now occupied by Mr. Kichard Davis is a part of that built by the judge. John Hancock, who was a friend and frequent visitor of the judge, took from his estate many elm trees to be planted on Boston Common. The original Chadbourne House was burned by American Indians in the late 1600s. In 1770, Judge Benjamin Chadbourne, great-grandson of Humphrey Chadbourne, built the present house. The judge donated the 10 acres of land and money that initiated the founding of Berwick Academy in 1791. The judge is said to have been a wealthy aristocratic type who loved to give lavish parties. John and Olive Wallingford Cushing lived in a mansion that was on the site of Central School. A native of Massachusetts, John had been a colonel in the 2nd Plymouth County regiment. During the Revolutionary War they had lived in Boston throughout the British siege of the city. In 1825, after John Cushing's death, Madame Cushing received General Lafayette when he visited South Berwick. The Curshings' son-in-law, H. H. Hobbs (1802-1884), was a prominent judge, school committee member and Berwick Academy trustee. He served as defense attorney in South Berwick's 1854 murder case against William B. Smith. The Cushings had lived in Boston during the Revolution and the siege of Boston, and had known General Lafayette. John Cushing had been a colonel in the 2nd Plymouth County regiment, and served throughout the Revolutionary War. He died in 1822. In 1825 when Lafayette toured the United States 50 years after the war, he paid a visit to Madame Olive Cushing that was celebrated for years after. Edward P. Hayman (c. 1770-1831) was born in Boston and apprenticed to South Berwick lawyer Dudley Hubbard. Elected a member of the Massachusetts Senate in 1800 and appointed assistant clerk of the Supreme Court, he married Rev. Tompson's daughter Sarah in 1809 and became Berwick Academy's treasurer. He served as a circuit clerk until 1820 and then as cashier of South Berwick Bank. History from the Old Berwick Historical Society, The Wentworth Genealogy By John Wentworth and Wikipedia.