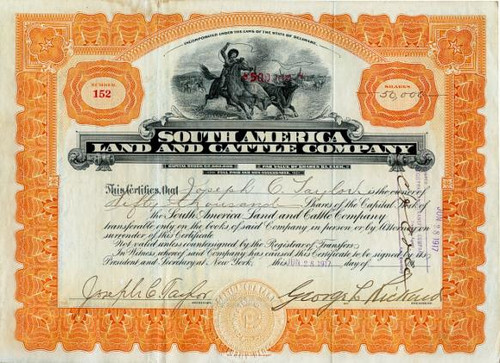 Beautifully engraved certificate from South America Land and Cattle Company issued in 1917. This historic document was printed by the New York Banknote Company and has an ornate border around it with a vignette of a cowboy roping a steer. This item has the signatures of the Company's President, George Lewis "Tex" Rickard and Secretary, Joseph c. Taylor and is over 90 years old. 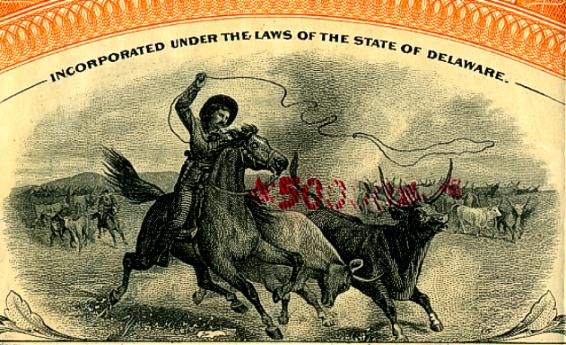 Bold Signature
RICKARD, GEORGE LEWIS (1871-1929). George Lewis (Tex) Rickard, professional boxing promoter, was born in Kansas City, Missouri, on January 2, 1871. When he was four years old his family moved to Sherman, Texas, where they purchased and operated a cattle ranch. The family later moved to Cambridge. Rickard spent his youth working cattle and, after the death of his father in 1881, supported his family in this way. At age twenty-three he was elected city marshall of Henrietta, the Clay county seat. In this position he established a reputation as a tolerant and honest lawman and a superior poker player, two qualities perhaps encouraged by the relative absence of serious crime in the community. While serving as marshal he met and married his first wife, Leona Bittick, to whom he was married until her death in 1925. Rickard, whose favorite pastime was gambling, moved to Alaska and established a number of gaming houses in the Klondike during the late 1890s. Though he was credited with operating the only "square" game in the Klondike, he accumulated $500,000 in four years; but he lost the fortune through the purchase of worthless gold claims. Following a short period spent as a gambler in California, Rickard moved to Goldfield, in a Nevada mining area, where he operated a gambling establishment. There he first became involved in the promotion of professional boxing matches. On September 3, 1906, he staged a lightweight title fight in which he offered the unheard-of purse of $30,000. Receipts of over $62,000 ensured his success in this endeavor and encouraged Rickard to take up boxing promotion as his profession. Not until July 4, 1910, however, did he stage a second fight, a heavyweight match between Jack Johnson and James J. Jeffries, at Reno, Nevada. Rickard offered a purse of $101,000 to the boxers, but still managed to make a profit from the fight. He then abandoned the fight game for some six years. He traveled to various Latin American nations and speculated in the beef market with his company the South America Land and Cattle Company. In this process he made and lost a number of small fortunes. He returned to the United States and to boxing promotion in 1916, when he arranged the heavyweight match between Jess Willard and Frank Moran at Madison Square Garden in New York City. The bout attracted a gate of $156,000, a new indoor record. Rickard remained heavily involved in fight promotion for the remainder of his life, successfully combining his obvious willingness to take risks with an apparent talent for recognizing and developing the possibilities of a good boxing match to build a fortune. After losing money on a heavyweight title match between Jess Willard and Jack Dempsey at Toledo, Ohio, on July 4, 1919, 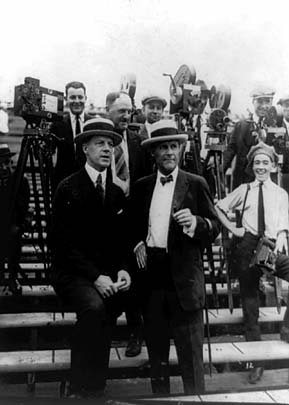