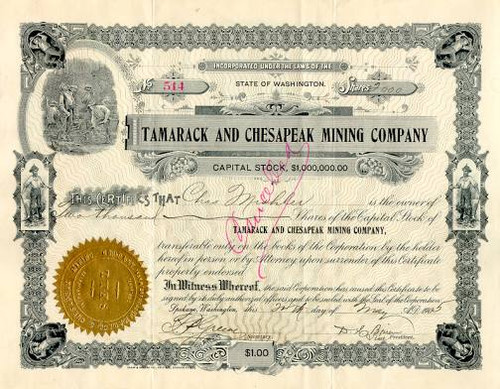 Beautifully engraved Certificate from the famous Tamarack and Chesapeak Mining Company issued in 1905. This historic document has an ornate border around it with a vignettes of various ming scenes. This item is hand signed by the company's officers and is over 95 years old. The Tamarack & Chesapeak Mining Co. -- no explanation has been found as to why Chesapeak lacks the final "e" -- was incorporated in 1897 to manage a number of claims above Burke Canyon in Shoshone County, Idaho. The major stockholder and manager before 1906 was Daniel Brien, a Wallace, Idaho, physician. The Day brothers, convinced of the value of the Tamarack & Chesapeak holdings, began buying up stock quietly, acquiring proxies and delinquent stock. By 1906 they controlled the majority of shares and were in a position to oust Brien and elect themselves to the board of directors. Harry Day became president and manager. Litigation followed in which Brien claimed ownership, through his Snowy Peak Mining Company, of certain company properties. By 1913 the Days emerged as the victors but were required to pay compensation for some of the lode claims in question. Daniel Brien subsequently left the area; his last known address according to the local paper was Seoul, Korea. When title to the Tamarack & Chesapeak holdings had been settled, the Days merged this firm with their adjacent Custer Consolidated Mining Company to form the Tamarack & Custer Consolidated Mining Company.