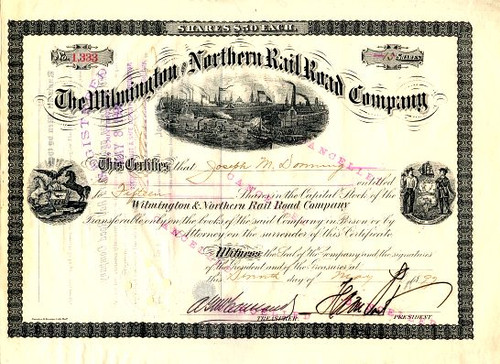 Beautifully engraved certificate from the Wilmington and Northern Rail Road Company issued in the 1890's. This historic document has an ornate border around it with vignettes of an old harbor scene and two state seals, Delaware and Pennsylvania. This item is hand signed by the company's president, Henry A. Dupont and is over 113 years old. Pen/Punched cancelled.

Certificate Vignette
Henry Algernon Du Pont was born near Wilmington, Del., 30 July 1838, was graduated at the U. S. military academy, 6 May 1861, at the head of his class, and promoted to 2d lieutenant of the engineer corps. On 14 May he was commissioned 1st lieutenant, 5th artillery, and became captain 24 March 1864. He was acting assistant adjutant general of the troops in New York harbor in 1862'3, and commanded a battery in West Virginia from 1863 until 24 May 1864, participating in the battle of Newmarket. As chief of artillery of that department from the latter date he commanded the artillery in engagements at Piedmont, Lexington, and Lynchburg during the spring and summer of 1864. Later in the year he took part in the battles of Cedar Creek, Halltown, Berryville, Opequan and Fisher's Hill, in command of the artillery of Crook's corps, being brevetted major for gallant services in the two last-mentioned engagements, and lieutenant colonel, 19 October 1864, for services at Cedar Creek. Henry A. duPont won the Medal of Honor for brilliant action at Cedar Creek. After the war he was a member of the board to assimilate the tactics for the three arms of the service. Colonel Du Pont resigned in March 1875. He served as President of the Wilmington and Northern Rail Road Company and was U.S. Senator from Delaware from 1905-1917