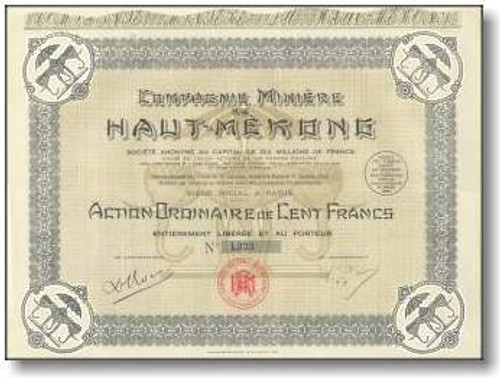 Beautifully engraved Certificate from the Compagnie Miniere du Haut - Mekong issued in 1923. This historic document has an ornate border around it with a vignettes and underprints of elephants. This item is hand signed and is over 73 years old The Mekong Delta is the bottom half of Vietnam's two rice baskets, the other being the Red River Delta in the North . This vast delta is formed by the deposition of the multiple tentacles and tributaries of the mighty Mekong River which has its origin in the Tibetan highland plateau 2,800 miles away. From its source, the river makes its way through China, Myanmar (Burma), Laos, Cambodia and South Vietnam before flowing out into the South China Sea. The Mekong's Vietnamese name, Cuu Long, means Nine Dragons for the nine mouths that terminate the flow of this great river as it is absorbed by the sea. The people of south Vietnam are often very proud of the richness and vastness of this land. When referring to the rice fields in this area, they often say, "co bay thang canh", meaning the land is so large that the cranes can stretch their wings as they fly. Today, the region is one of Vietnam's highest producer of rice crops, vegetables and fruits.