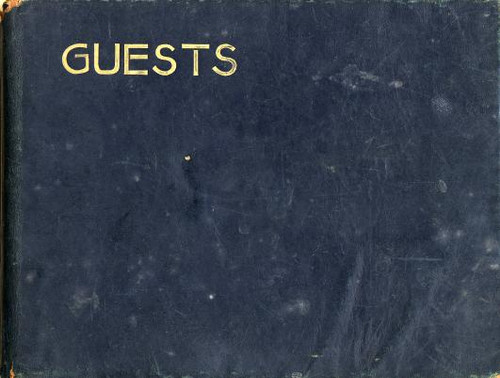 Signed leatherette covered Guest Register from the Herald Square Hotel dated from Novermber 1942 to March 1945. This historic document has over 1000 signatures of guests on 38 filled in pages. This item is over 67 years old. Herald Square Hotel is near the Empire State Building and Macy's, and was the former home of Life magazine. 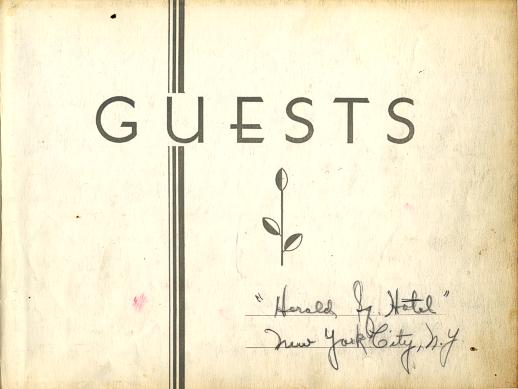 Example page
In addition to the signature, the register includes the person adress and a column for remarks. Most of the remarks are comments on the quality of the food-which apparently was noteworthy for the War years. Many of the signatures are military officers, New York City residents, and many out of towners from Washington and other parts of the country. The register is intact-nothing has ben cut out. During a quick run through, I found Jolly Bill Steinke and Edsel Ford Jr. I am sure there are other note worthy signatures in this book, but I don't have the time to research each one. 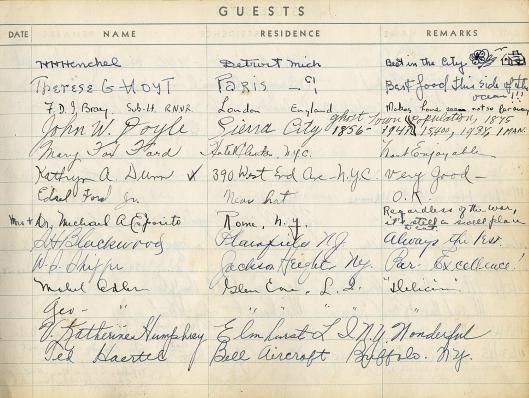 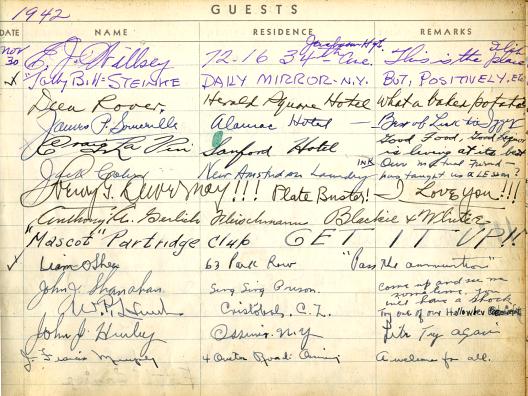 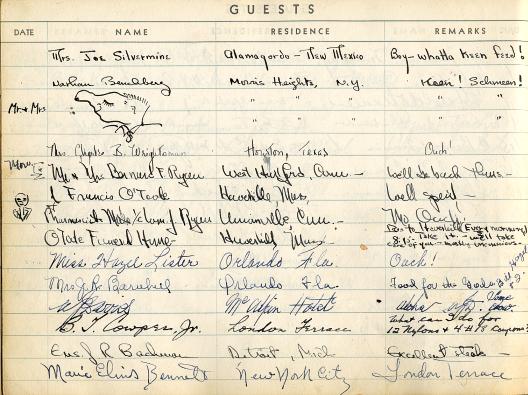 Example page
Jolly Bill Steinke William Steinke was born on November 25, 1887 in Slatington, Pennsylvania, near Allentown. In his early working life, Steinke was a traveling sales representative for the National Biscuit Co. in Maine. On one of these trips he met and eventually married the former Alice M. Staples. Later, Steinke worked for Pennsylvania newspapers, including the Allentown Democrat and Scranton Republican, as a cartoonist and reporter. While at these newspapers he gained a reputation as a practical joker and was apparently much beloved by his newspaper colleagues. He was also a comedic performer and popular public figure. In the 1920s, Steinke was hired by a Washington, D.C. press syndicate to cartoon various politicians and government officials. In the course of this assignment, he met President Calvin Coolidge and made a sketch of him that made the famously dour Coolidge laugh. From then on Steinke was known as the man who could make President Coolidge laugh. Steinke made the jump to New York first at station WJZ and then over the NBC Radio Network in 1927, where he remained for 34 years. Among Steinke's popular radio programs were the Jolly Bill and Jane and Rise and Shine radio programs that aired mornings on NBC Radio. The name of his radio persona, Jolly Bill, became the name by which he was best known by friends and fans alike. In 1933, his voice was the first to be broadcasted over NBC Radio from the new RCA Building in New York. Steinke also continued cartooning, creating daily cartoons for Nick Kenny's column in the New York Mirror for many years. Examples of these cartoons are in the collection. The growing Steinke family, which would eventually include four children, William, Jr., Caroline, Barbara, and Bettina, also moved to New York, living in New Rochelle for many years. Steinke kept up a busy schedule of personal appearances with his comedic show, Never a Dull Moment, which featured Steinke caricatures of audience members drawn on his portable easel. Jolly Bill Steinke was a charter member of the Circus Saints and Sinners Club in New York. This group, which staged dinners and other events, raised money to help support injured and indigent circus performers. Steinke served as the master of ceremonies for many of these events during the 1930s. Steinke was also well known for the many drawings he left on the walls, floor, and ceiling of the Palm Restaurant in New York City, which can still be seen. During World War II, Steinke toured veteran's hospitals as an entertainer. By the late 1940s it was clear that the entertainment wave of the future was television. Jolly Bill Steinke successfully made the transition, working in children's television in New York, San Francisco, and Maine. At press club dinners and other events, Steinke's impromptu caricatures of the people, both famous and common, continued to be a hit. The collection includes photographs of Steinke sketching at some of these events. Late in his life, he did a series of "Bill Steinke Remembers" cartoons for the Allentown Morning Call newspaper. Many examples of these cartoons are included in the collection, including one original.