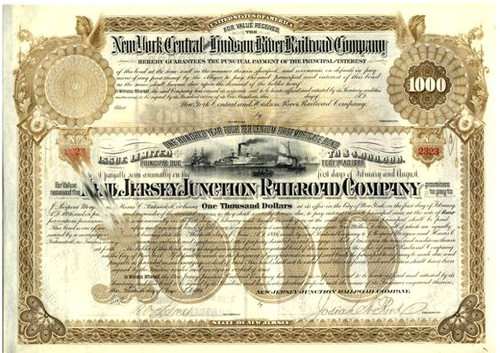 Beautifully engraved $1,000 bond Certificate from the New Jersey Junction Railroad issued in 1886 and was due in 1996. This historic document was printed by the American Banknote Company and has an ornate border around it with a vignettes of an old harbor scene and a paddle wheeler going up the river. This item is hand signed by the company's officers including J.P. Morgan and H. C. Fahnestock on the verso as Trustees. Excellent Condition. This extraordinary item is over 133 years old. Unused coupons attached on left side.

He single-handedly saved the United States from bankruptcy on two occasions, but was often accused of being a monopolist. He wielded as much power as the president and turned Wall Street into his personal playground. John Pierpont Morgan had an aptitude for acquisition. He assembled one of America`s largest fortunes and purchased an art collection to rival any in the world. Morgan once brokered an agreement between two competing railroads by inviting both presidents for a cruise on his yacht (Corsair)and refusing to let them off until they came to terms!

John Pierpont Morgan, the son of a successful financier, was born on 17th April, 1837. Educated in Boston and Germany, he trained as an accountant at the New York banking firm of Duncan, Sherman and Company. In 1867, Morgan transferred to his father's banking company and ten years later became a partner in Drexel, Morgan and Company. This was reorganized as J. P. Morgan and Company in 1895, making it one of the most important banking houses in the world.

In 1891 Morgan arranged the merger of Edison General Electric and Thompson-Houson Electric Company to form General Electric, which then became the country's main electrical-equipment manufacturing company. After financing the creation of the Federal Steel Company he joined with Henry Frick to merge it with Carnegie Steel Company to form the United States Steel Corporation.

Morgan had good links with the London financial world and was able to arrange the capital for growing industrial corporations in the United States with money from British bankers. This enabled Morgan to become a member of the board of directors in several of these companies including most of the major railroad companies. By 1902 Morgan controlled over 5,000 miles (8,000 km) of American railroads.

In his final years, Morgan concentrated on gaining control of various banks and insurance companies. This in turn gave him influence over most of the nation's main corporations. Some muckraking journalists began to criticize the enormous power that Morgan now had. John Pierpont Morgan died on 31st March, 1913.

1895 Five years after his father's death, Pierpont consolidates the family's banking interests, assuming the role of senior partner in each of four related firms in New York, Philadelphia, London, and Paris.

Harris C. Fahnestock was born in Harrisburg, Pa. in 1836. He left school at 16, worked in his father's store for a time but soon became a bank teller. Subsequently, he joined a brokerage firm in Philadelphia and became a partner in 1881. William Fahnestock (son of Harris C.) at the age of 16 began his career as a clerk in his father's bank.

On May 10, 1881, William founded Fahnestock & Co. The first Fahnestock & Co. office was located on the fifth floor of the First National Bank building at Two Wall Street, in New York City. Later, William Fahnestock, Jr. became a partner in the company and, upon the death of the founder in 1936, succeeded his father as Senior Partner.

During the Great Depression, Fahnestock & Co. opened three offices and acquired another prestigious brokerage firm (1937) in anticipation of an economic resurgence. Fahnestock steadily expanded during the late 1940's and 1950's. During the 1930's, the firm was at its performance peak as a partnership. By 1968 it had representations in 31 U.S. communities and in 10 foreign countries.

At the present time, the Fahnestock and First of Michigan sales force of approximately 720 Financial Consultants provides investment services to individual and institutional clients worldwide throughout 75 offices. The firm's capital of over $168 million and the listing of its common stock on the NYSE in 1996 allows Fahnestock to service its clients, and strongly support its employees efforts.