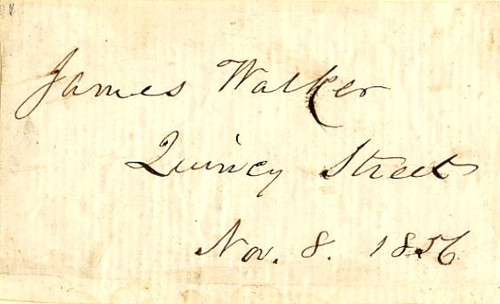 James Walker autograph dated Novermber 8, 1856 signed from Quincy Street. James Walker was the president of Harvard University. He was born in Burlington, Massachusetts, 16 August, 1794; died in Cambridge, Massachusetts, 23 December, 1874. He graduated at Harvard in 1814, studied theology at Cambridge, and was pastor of the Unitarian church in Charlestown for twenty-one years. During this period he was active in his parochial duties and in advocating the cause of school and college education, lectured extensively and with success, and was a close student of literature and philosophy. In 1831-'9 he was an editor of the "Christian Examiner." He resigned his pastorate in July, 1839, the following September became professor of moral and intellectual philosophy in Harvard, was elected its president in 1853, and held office till his resignation in 1860. He devoted the remainder of his life to scholarly pursuits, and left his valuable library and $15,000 to Harvard.